Conveyor Systems for the Finishing Industry

Faced with the challenge of handling a wide variety of different size parts and recipes, more than anything else, the finishing industry needs a conveyor system that is extremely flexible and able to handle a wide range of products efficiently. 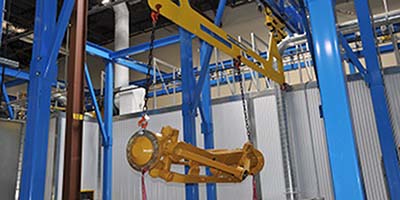 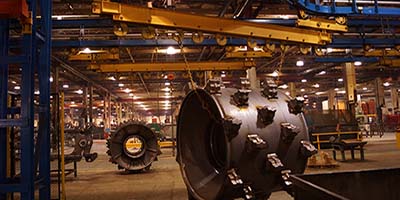 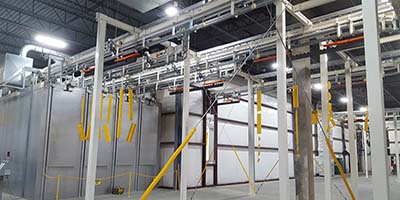 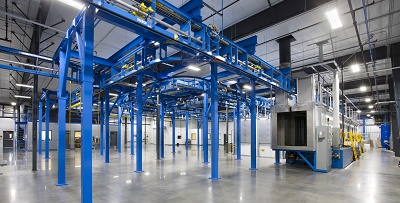 Opportunity:
Large manufacturer of construction equipment chose the IntelliTrak 3500 Series for their new facility largely because of its promise of extreme modularity.

Solution:
IntelliTrak’s friction drive system (no chains) and modular support structure (bolted, not welded), is easily modified, expanded and moved—the entire system if required!
As parts or quantities change and new models are developed, this system is able to easily adapt to those changes. In addition, the system’s flexibility, forward/reverse capabilities and the use of spurs, all serve to improve processes, reduce downtime and increase productivity. All components are standardized so that moving forward, further installations and modifications will be simple with minimal project management required.
Perfect example of IntelliTrak’s modularity:
In one weekend, at the customer’s request, IntelliTrak added switches and a cooling lane, all while production continued, with no downtime and no overtime. That’s a game-changer!

Solution:
IntelliTrak custom-designed a 3500 Series Overhead Conveyor with 2600 ft. of conveyor, 40 carriers (10,000 lb. capacity), two vertical lifts and finishing system components. And installed it in three weeks!
HOW? Only possible due to the modularity of the IntelliTrak System, that not only shortens installation time, but allows for preliminary engineering and pre-assembly.

First day after shutdown, system was up and running. By the end of the week, it exceeded the previous systems’ production levels, meeting TAKT time of 5 minutes per part; 100 parts per day. Increased production with the added bonus of a cleaner, quieter, safer, more pleasant work environment!

Opportunity:
In 2016, IntelliTrak installed a 500 Series Overhead Conveyor finishing system for a roller conveyor manufacturer, replacing a power and free chain conveyor that had reached production capacity. The system included six lifts, washer, spray booths, and a cure oven with four lanes that would be able to accommodate a variety of different sized parts, as well as increase overall production. One year later, the customer added a new product line with a larger part.

Solution:
Thanks to the inherent flexibility of IntelliTrak’s friction drive system and modular support structure, IntelliTrak was able to easily modify the system and add another lane, equipped with 3 more lifts, to accommodate the new product line. With this addition, the customer was able to meet the 75 jobs per hour requirement.

For a family-owned metal fabricator with a stand-alone spray booth, the IntelliTrak 1500 Series provided much-needed flexibility. Flexibility that would enable them to accommodate a variety of part sizes, a wide range of job quantities, as well as custom part recipes and processes.
The IntelliTrak 1500 Series Overhead Conveyor greatly expanded company capabilities and ultimately, opened up new markets for them. And with the ability to complete jobs in-house, the customer was able to reduce throughput time and have more control over the quality of the finished product.

Opportunity:
A large manufacturer of heavy industrial equipment had reached production capacity with their existing power and free chain conveyor. They needed a new system that would not only increase throughput, but one that would accommodate both light and heavy parts with custom paint recipes and curing times.

Solution:
IntelliTrak designed, manufactured and installed a 1500 Series Overhead Conveyor finishing system with multiple staging lanes for both heavy and light products—providing a much more efficient way to move parts.

Solution:
IntelliTrak designed, manufactured and installed a 500 Series Overhead Conveyor System with a custom vertical lift, masking platforms, washer (pit-level for immersion), spray booths (with robotic function) and a custom-designed cure oven. With a biased-banking design, the cure oven could fit a greater number of parts in a smaller footprint, ultimately increasing production.