The modularity of IntelliTrak’s friction drive system (no chains) and support structure (bolted, not welded) makes it the ideal solution for assembly applications: 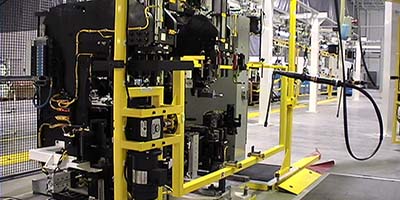 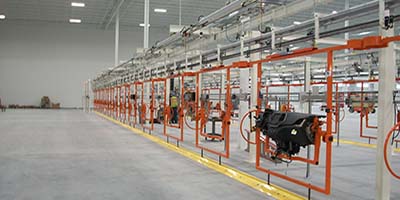 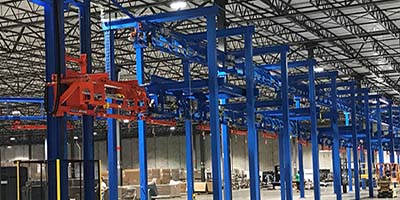 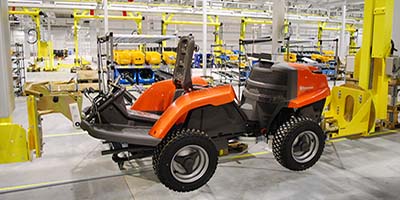 Opportunity:
In 2006, IntelliTrak installed a system in the customer’s new building.
When they were awarded a new contract in 2015, they had a choice: purchase a new conveyor system or modify the existing one.

Solution:
The inherent flexibility of the IntelliTrak 500 Series Overhead Conveyor made the decision simple: MODIFY IT!
Instead of having to build an entirely new system (as they would have had to do with a traditional power and free chain system), IntelliTrak was able to remove part of the old system, add new conveyor onto the old system, reuse some of the existing system, and save the customer thousands of dollars in both equipment and downtime.

The customer’s assembly requirements were complex—add 12 new stations with rotating motorized carriers equipped with RFID and powered conductor rail, taking into account the need for:

A supplier of automotive interiors needed an overhead conveyor system for their new facility.

Solution:
IntelliTrak designed, manufactured and installed a 500 Series Overhead Conveyor System that included 41 assembly workstations with 4 test zones and level 2 software controls to manage workstations. The new overhead conveyor not only freed up floor space, but gave them a real competitive advantage by allowing them to meet an extremely fast TAKT time of 75 jobs per hour.

Perfect example of IntelliTrak’s modularity:
In one weekend, at the customer’s request, IntelliTrak added switches and a cooling lane, all while production continued, with no downtime and no overtime. That’s a game-changer!